If you’re like most, you know what crocodiles and alligators are but have no idea of the difference between them or that is which. You might find this interesting.

In The U.S. crocodiles are found in only one area — southern Florida. Alligators also make south Florida home but they can be found in several different states, though mostly from the southeast. South Florida is the only place known on earth where crocs and gators cohabitate in the same location.

The simplest way to differentiate a gator from a croc is by the color. Crocodiles will typically have a lighter, olive brown color while alligators tend to have darker, almost black skin. Crocodile wallets will reflect this color difference by their lighter, almost golden color. Alligators prefer to maintain a freshwater environment while crocs prefer to be in brackish water and occasionally will even venture into the ocean.

While similar in many ways, both of these reptiles are actually from different families. Both are dangerous, primitive and, when in proximity, demanding of instant respect! They both possess huge and powerful jaws that can do considerable harm.

These are primitive beasts and have existed in the world for some 200 million years and have remained relatively unchanged at that time. It is amazing to realize that in the brief span of a single person’s life these animals were hunted into near extinction. Between the years of 1900 and 1967 these reptiles were nearly wiped off the face of the planet. Endangered species laws helped prevent this from occurring but it’s still an issue in some areas of the world. Thankfully, the American alligator was removed from the endangered species list through conservation efforts. The crocs, however, are still at risk. 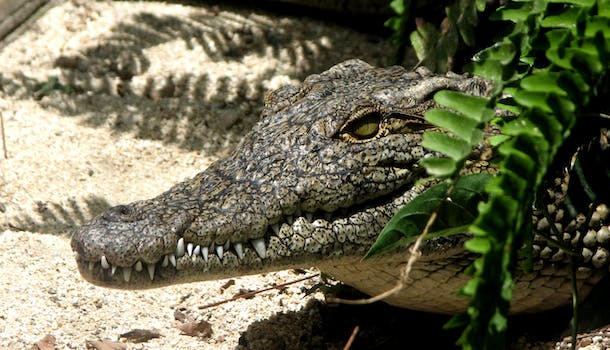 There are other ways to tell the difference between crocs and gators, like the way the teeth are organized. When his mouth is fully closed you can still see both rows of a crocodile’s teeth and they interlock with each other perfectly. You can only see the upper teeth when an alligator closes his mouth as the reduced set disappears into sockets in the mouth.

The manufacture and sale of accessories made from alligator hide has been booming recently. This is partly due to huge farms in Southeast Asia grow these animals with the goal of earning alligator wallets, belts, shoes and bags.